Out of the Shadows and into the Sun - ascent of La Maroma, Sierra de Tejeda

Describes an ascent of La Moroma in the Sierra de Tejeda - We drove to La Robledal where we commenced our ascent. We knew this would be a tough day with over 1000m ascent. The initial forest tracks were easy enough, but shortly we left these behind and took to an ever steepening mountain track.

The Nomads stayed overnight in Alhama de Granada and had a pleasant but somewhat noisy evening in the town's only bar that was open. Next morning was bright and clear, not as cold as we had anticipated. We drove to La Robledal where we commenced our ascent. We knew this would be a tough day with over 1000m ascent. The initial forest tracks were easy enough, but shortly we left these behind and took to an ever steepening mountain track. 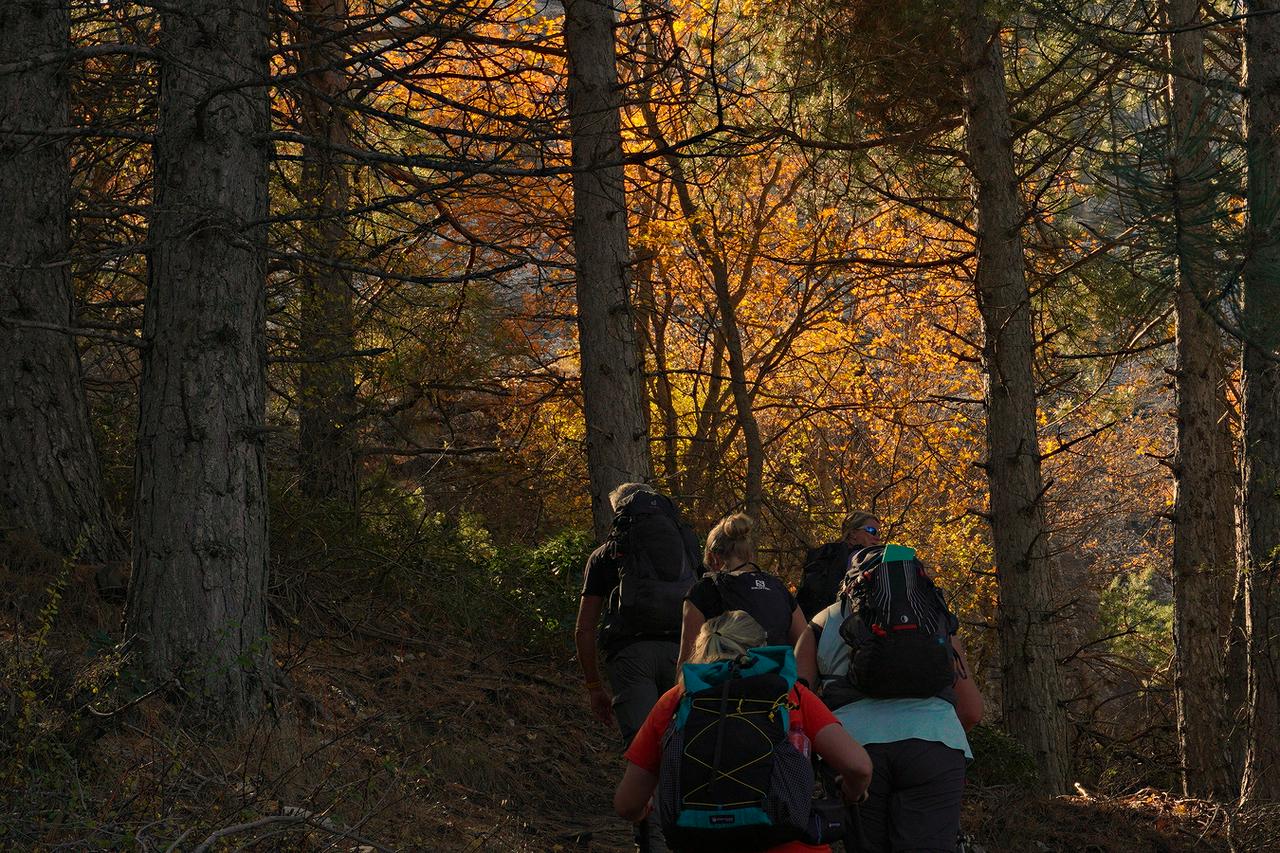 This section had numerous "Miradors" on the crest of the ridge that provided an excuse for a welcome break, photos and water replenishment. The track continued to get rougher as we climbed. 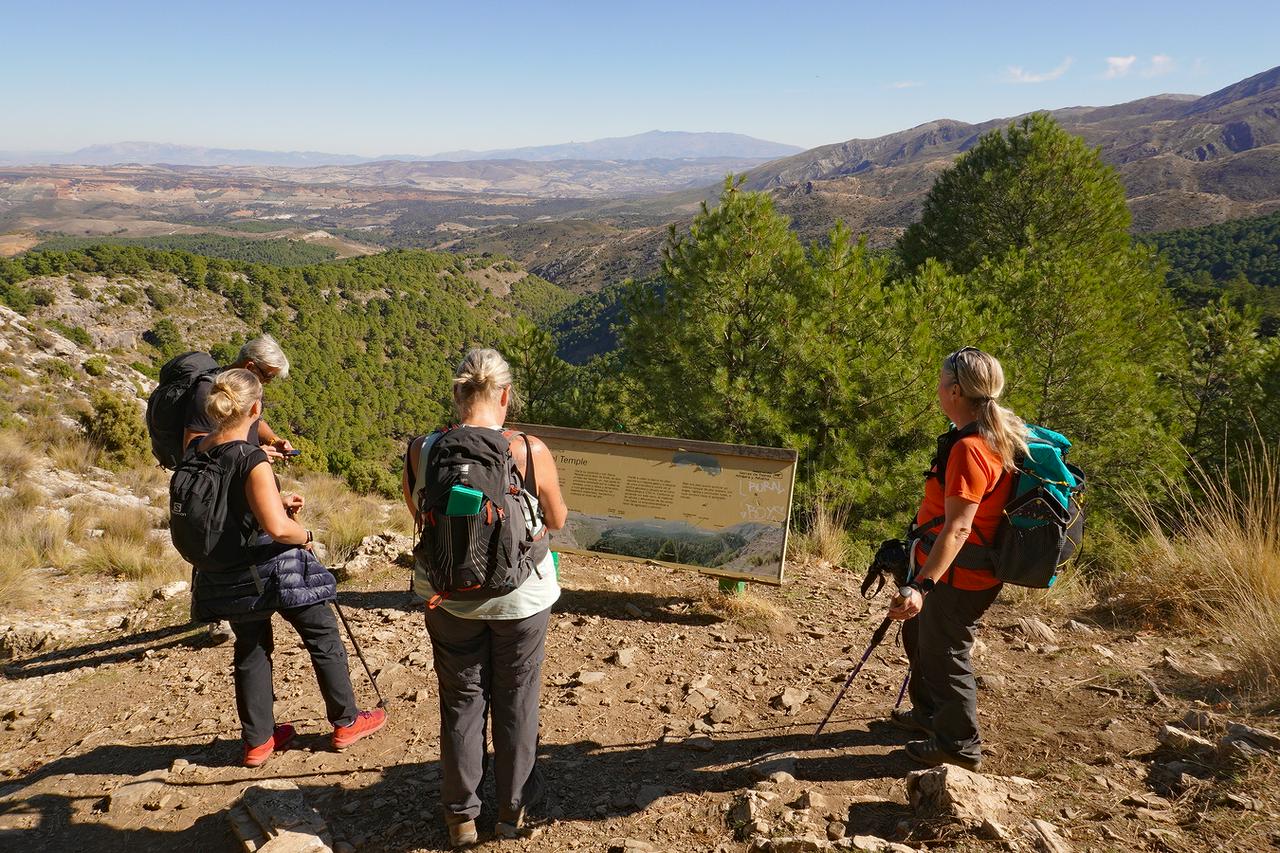 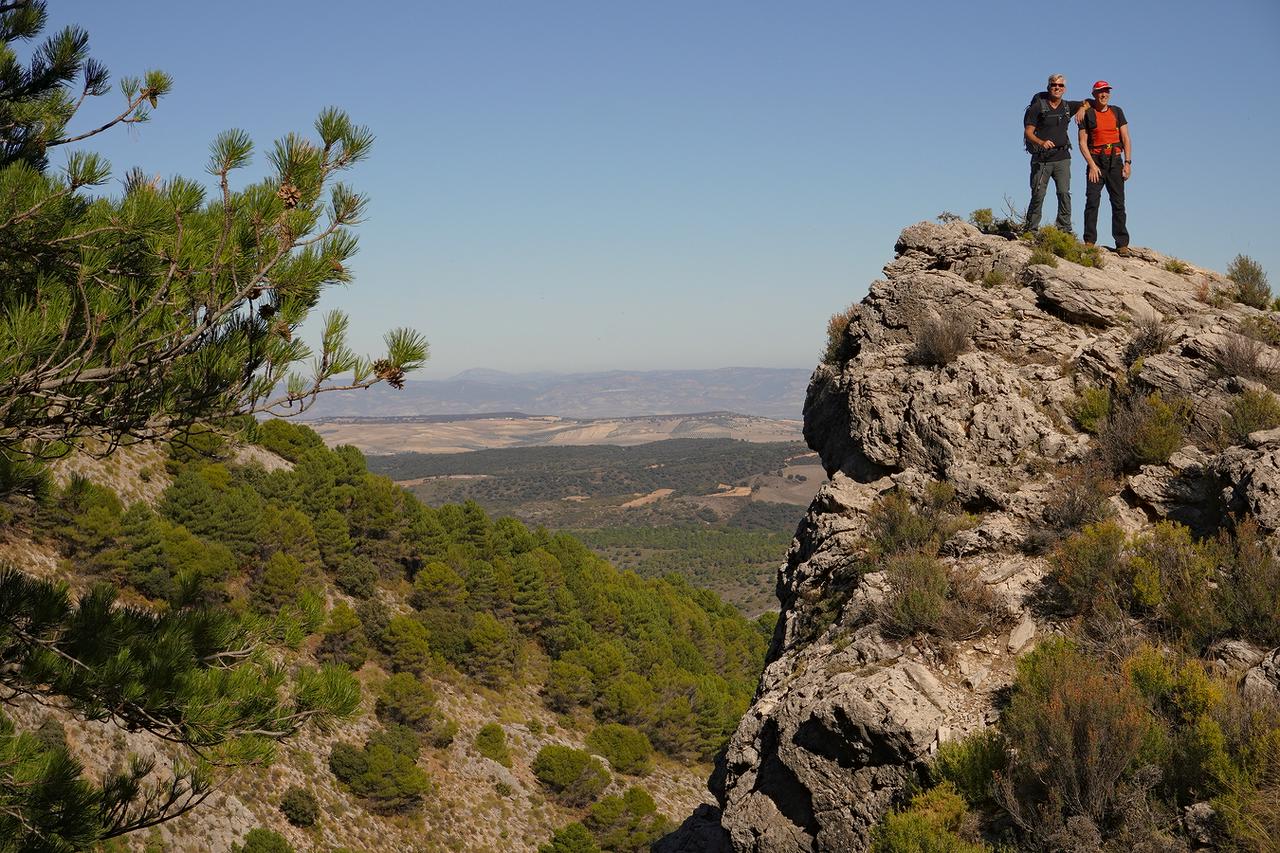 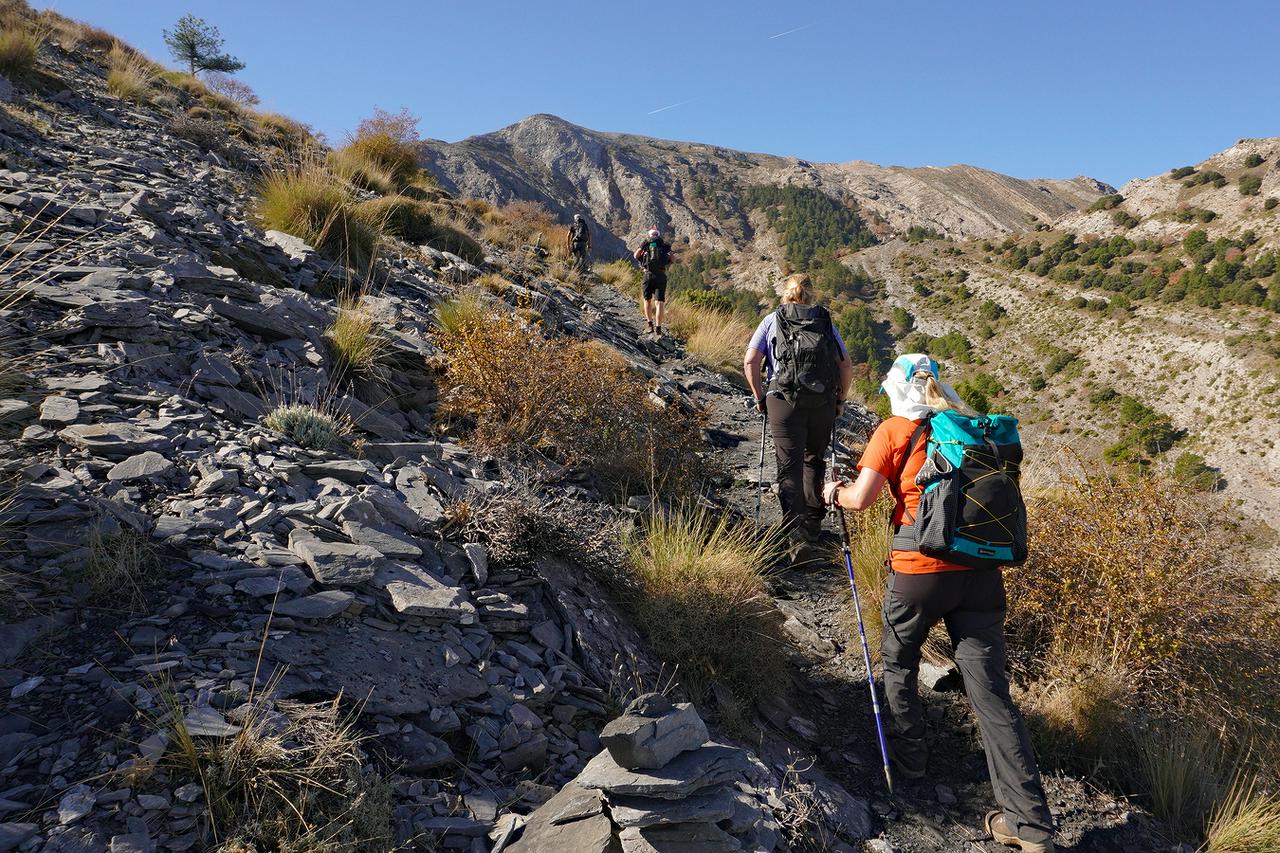 We broke out of the tree line at a band of crags. The path, now somewhat more vertiginous, traversed rightwards below them to an ingenious zig zag path up through them to the Puerto Lobera col, just west of Cerro Tacita de Plata, 1887m. 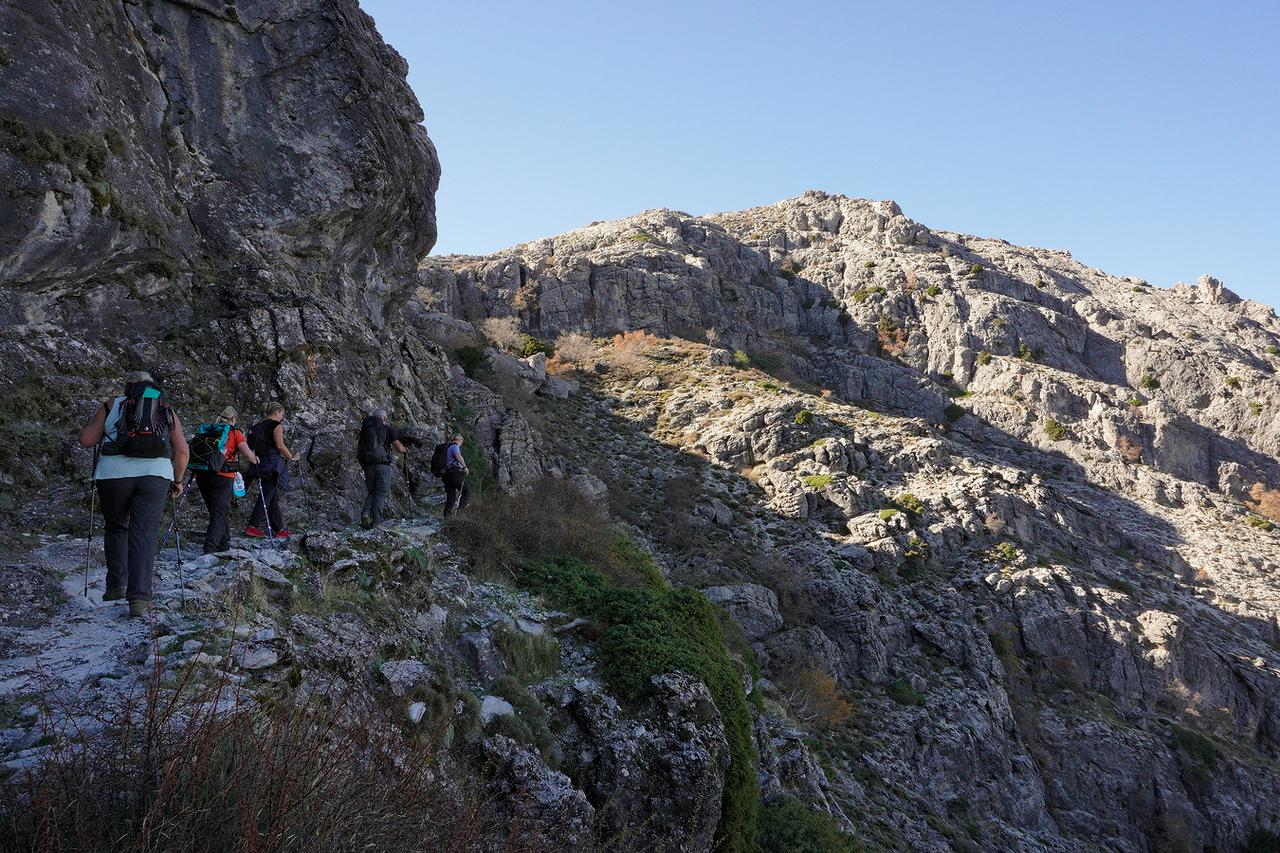 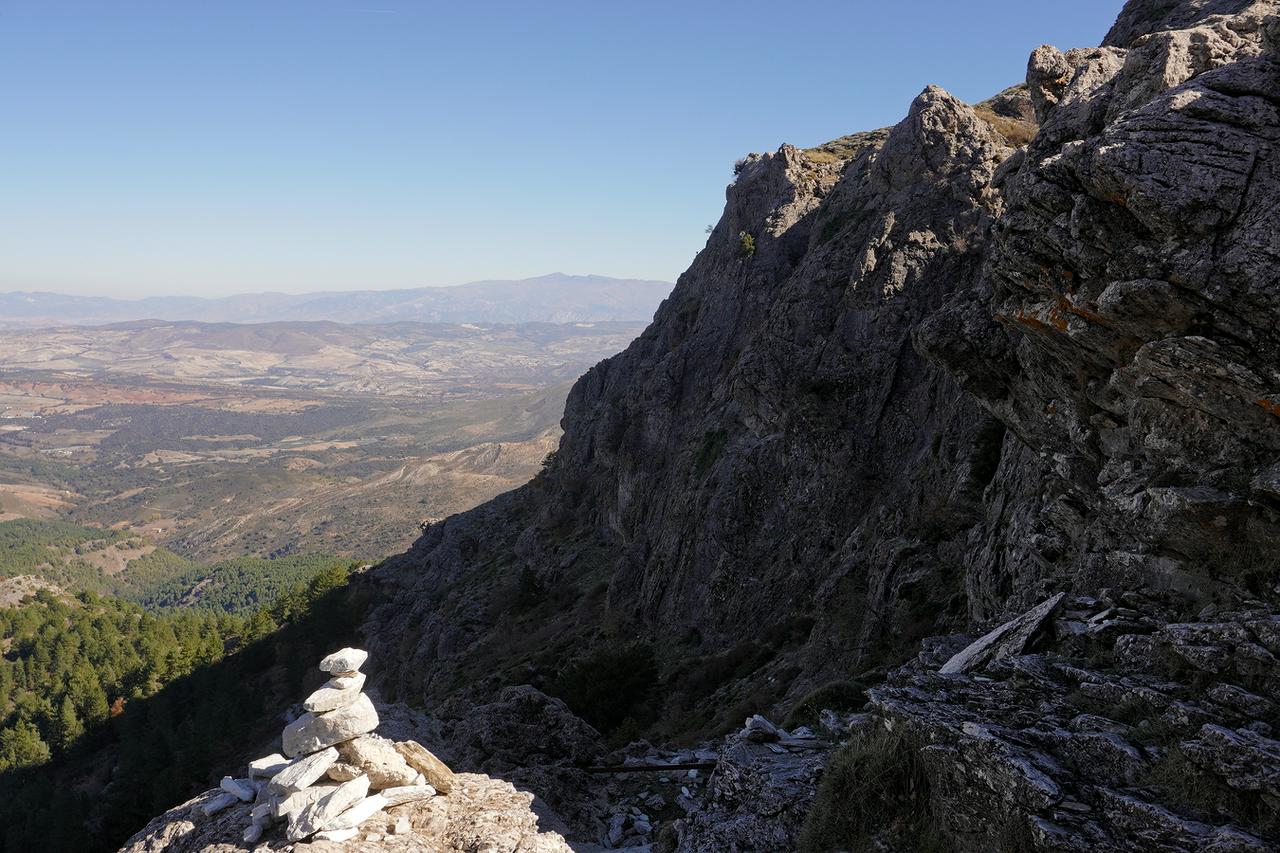 Up to now the low winter sun and looming cliffs had kept us mainly in the shade. As we broke out onto the slopes above the col we felt the warm, comforting heat from the sun. 15 minutes further and we got our first views on the Mediterranean Sea glinting in the sunlight. 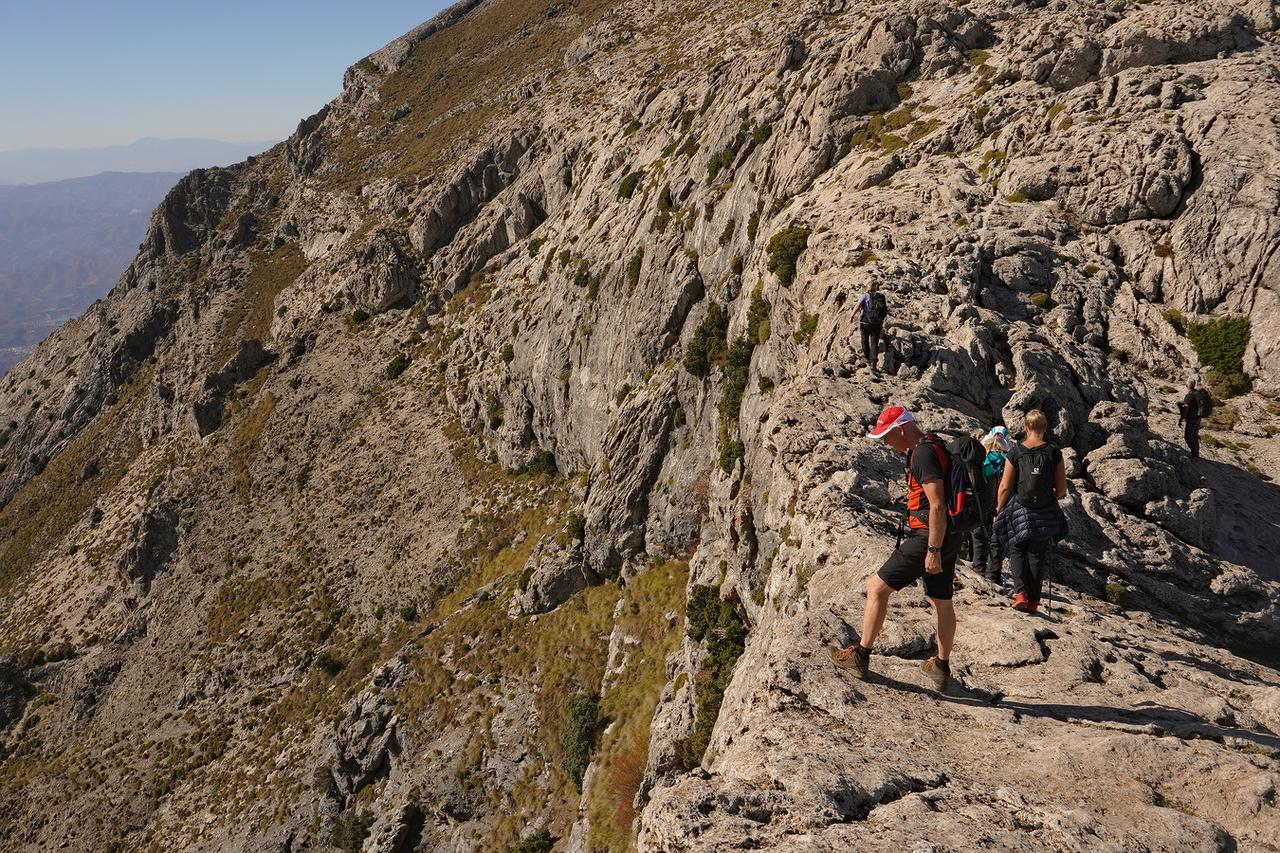 Arriving at the narrow "Tajo Volaero" provided a further "interesting" section on this route with a short passage of rock above a looming drop. Hardly scrambling but a place where concentration had to be maintained. 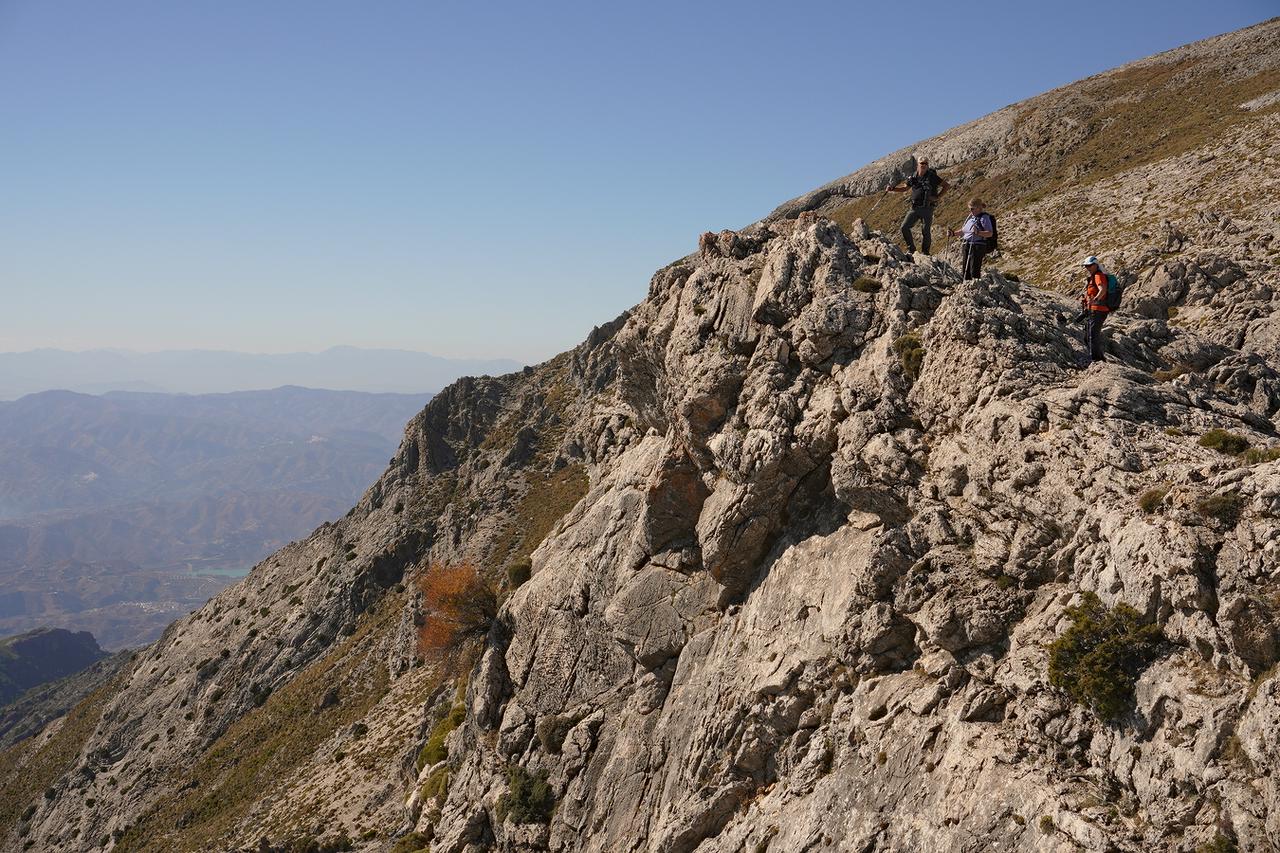 The track then traversed across the mountainside making for the summit, the angle easing with every step. All of a sudden the summit came into view for the first time. And what a surprise, the large summit, man-made tower, had a horse standing next to it! 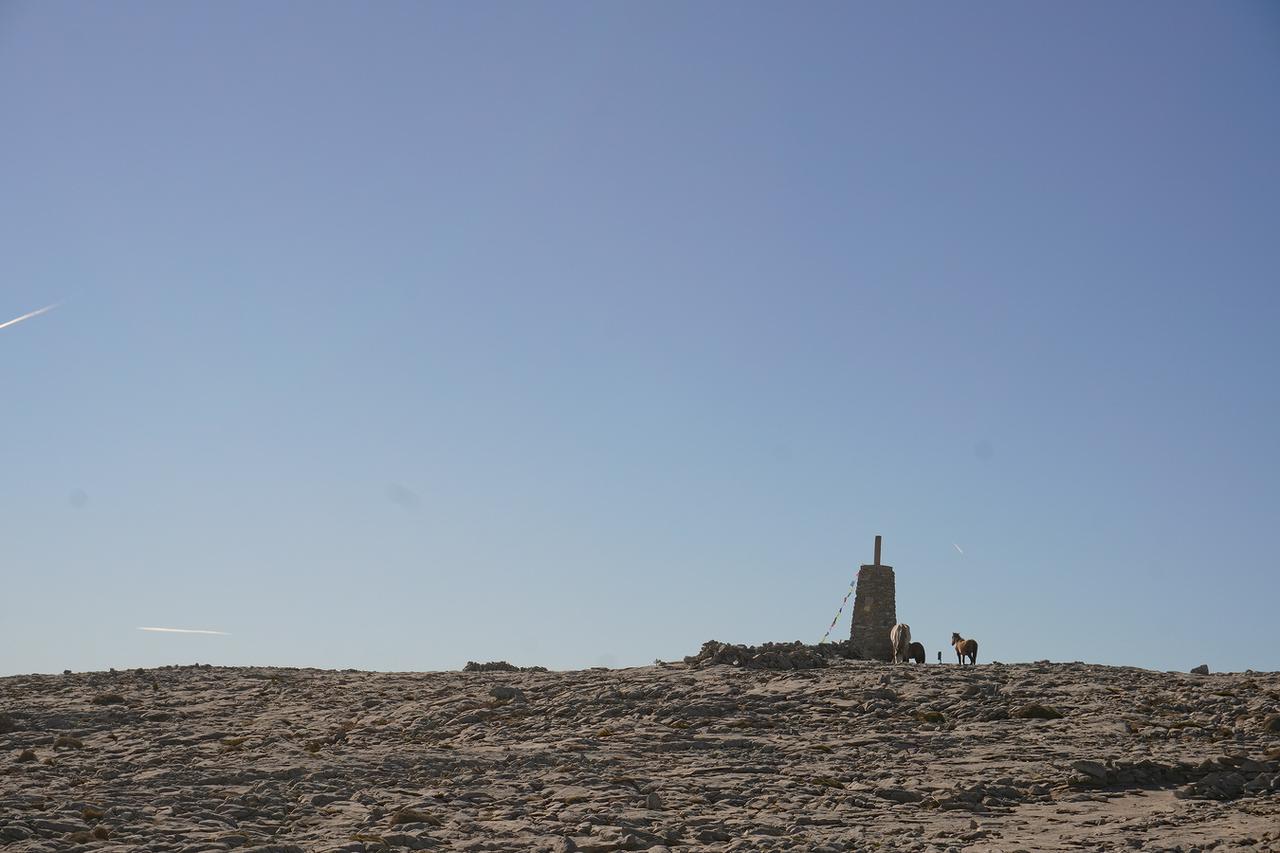 In fact it had more horses as we arrived there, very hungry ones at that. It seems they enjoyed our summit snacks almost as much as we did, although they got none of Ann's Death By Chocolate Brownies! 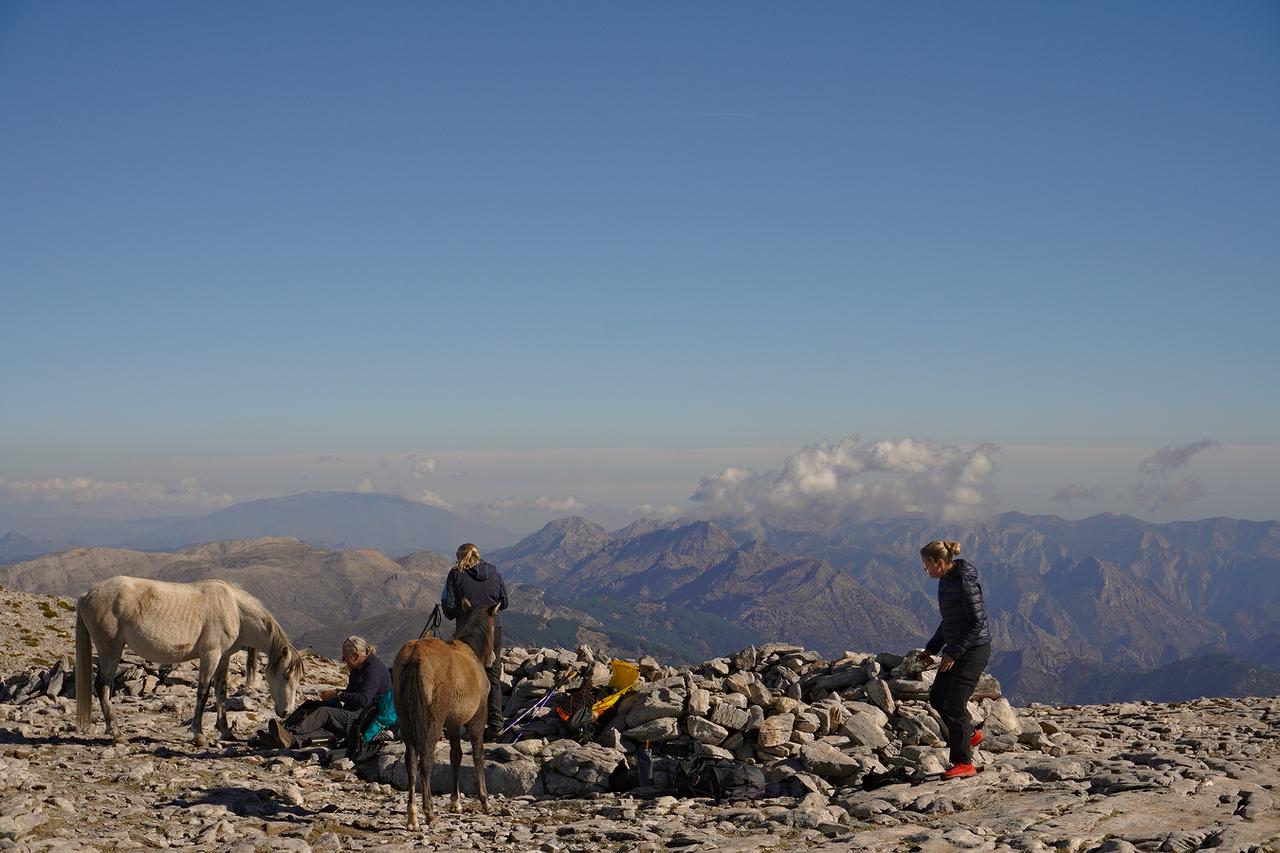 The view from the summit was very extensive. From the Straights of Gibraltar, Sierra de las Nieves, Torcal to the Sierra Magina (Jaen) and Sierra Nevada. In total a line of almost 300km distance could be drawn by the eye!

Being conscious of the winter daylight hours then we hurriedly (as fast as we could!) reversed the route of ascent back to La Robledal as the shadows lengthened, the colours mellowed and warmed. 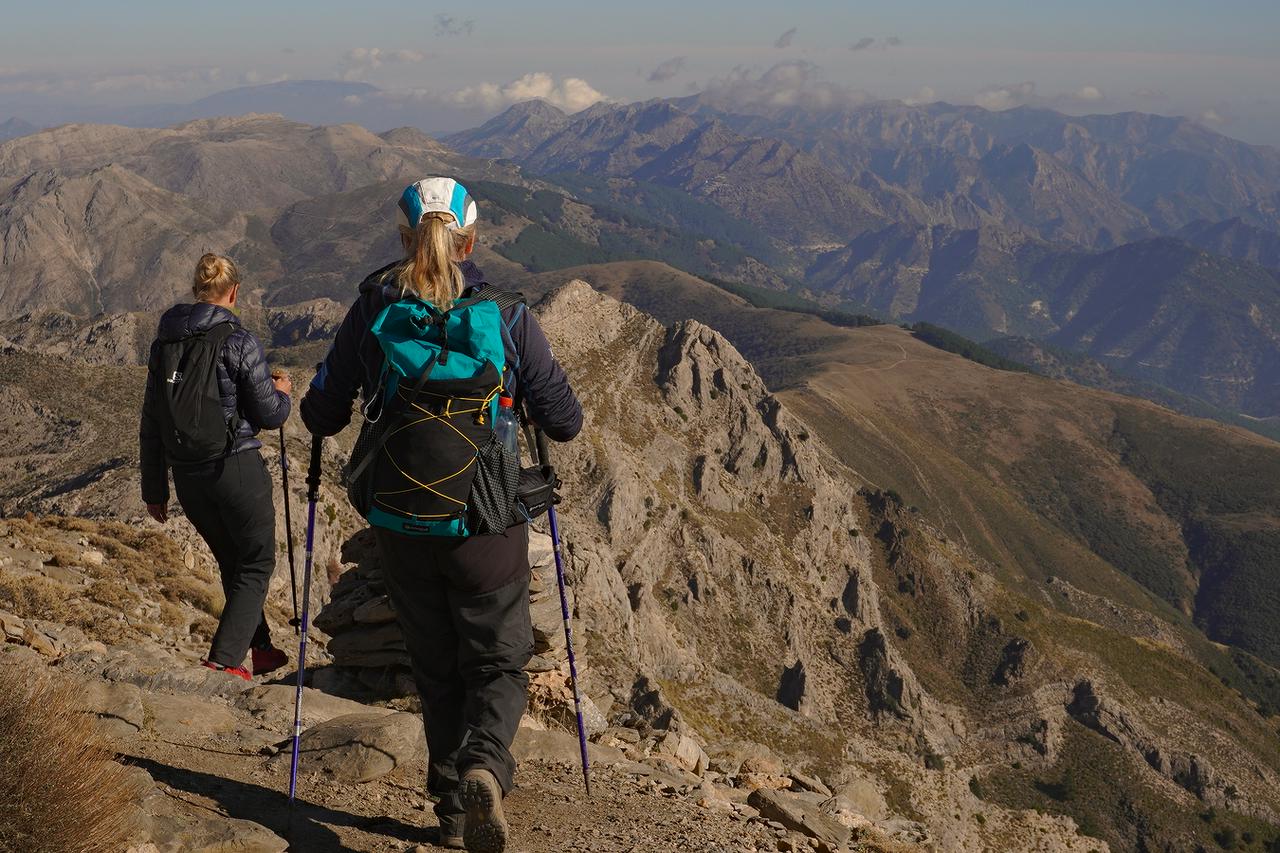 It had been a grand day out. 16km with over 1000 metres of ascent. It had taken just over 6 hours and 30 minutes to complete. About enough for me I think as one hip and both knees were aching as we reached the car. 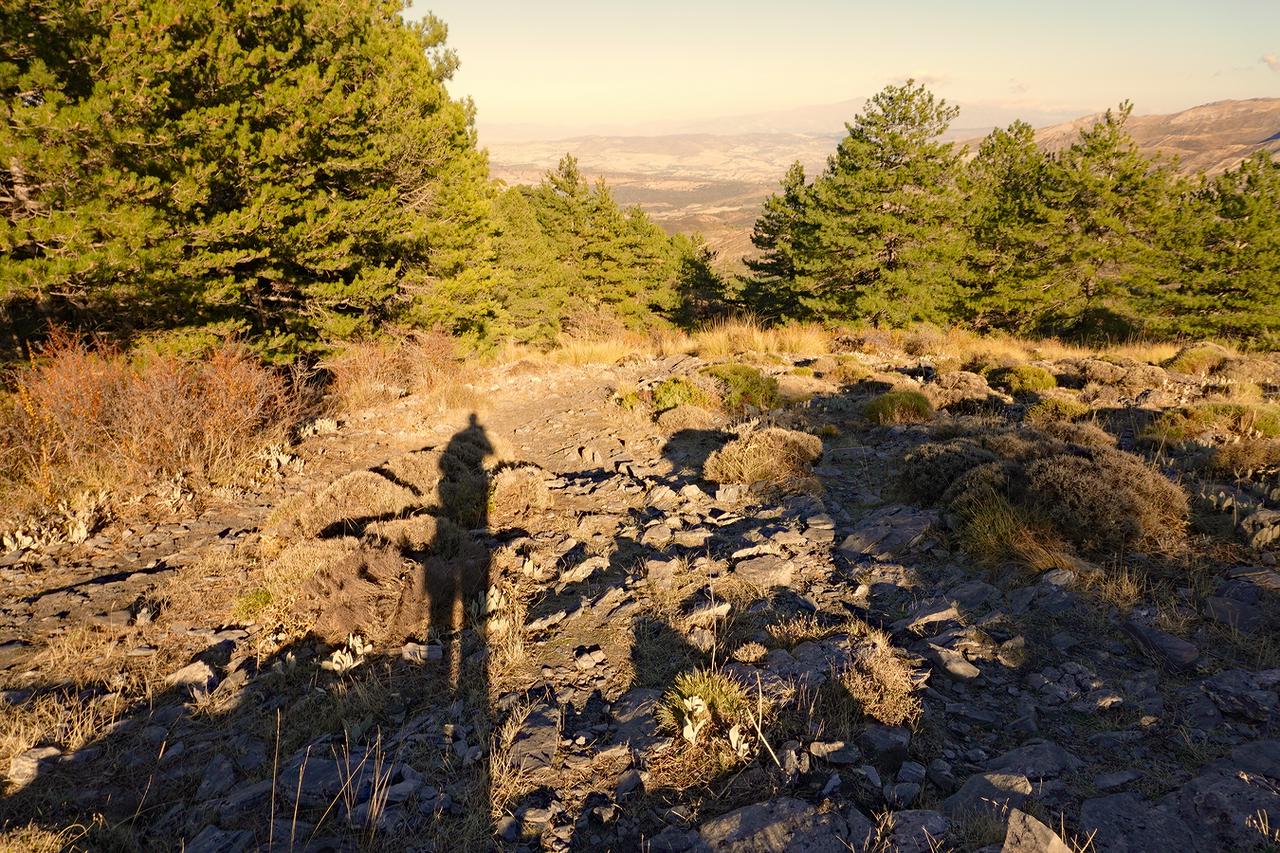 Thanks to Alistair, Ann, Annette, Jane, Kiersten and Sean for coming along and making this a hard but enjoyable excursion into the Sierra de Almijara.

Skiing with Rita in the Back Garden