The Road to Self Sufficency, Alpujarras

We are not naturals at the self-sufficiency game. Were not experts either. But, it is fun and there is a certain satisfaction at growing your own!

We are not naturals at the self-sufficiency game. Were not experts either. But, it is fun and there is a certain satisfaction at growing your own!

Irrigating the land - "Camposinos" or Muppets?

It's that time of year again. The waters from the snow melt of the high Sierra Nevada are flowing strongly. Soon this will end, and from mid-June to October or November we can expect little irrigation water. So the time is ripe for all good "camposinos" (country workers) to water their lands before the summer droughts. 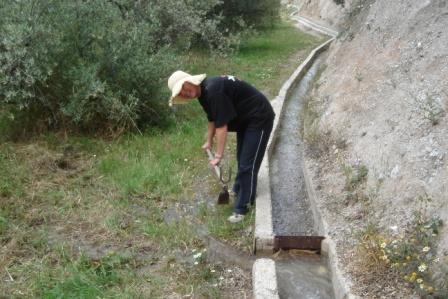 Now this may seem a great idea at first glance, but putting it into practice is not as easy as it would seem. For a start we have a 5 min drive to a high "gate" to start the water flow down towards my land. We then have to dam up a series of small streams, thus eventually getting water flowing through our land. 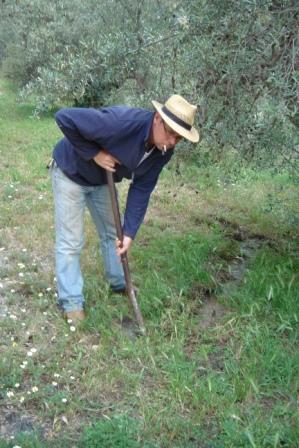 Eventually is the right wording, as it can take up to 2 hours before all the little nooks and crannies further up the hill have filled with water. So, like all good camposinos, we have a glass or six of vino tinto while we wait. By the time the water arrives we are rather worse for wear and not in a great state for the trials and tribulations to come. 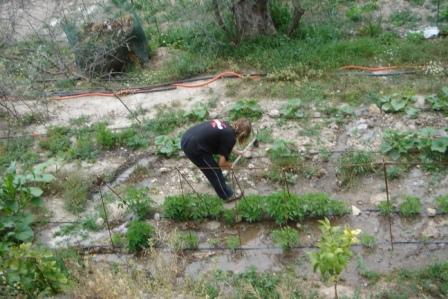 This involves flooding the land by opening the acequia (irrigation channel) gate. The water flows over the land in a haphazard fashion and we have to take our spades (don’t remember the correct word for them) and dig channels for the water to slowly creep across the land.

Some 5 hours later and we are covered in mud and have had to indulge in another bottle of vino. Such is life in the fast lane! 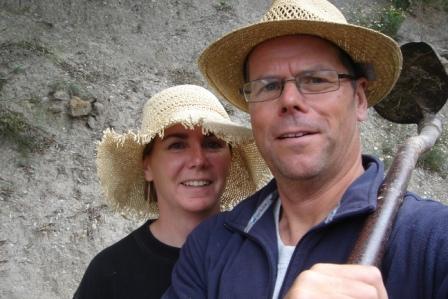 Life for a part time veggie in Spain!

Ok let's get this straight ... I am a red blooded meat eater, always was and always will be!

However I happen to live with a woman who has been a vegetarian for over 20 years. It hasn't been too difficult for me living with a "veggie" as the veggie cooking world has been easy to get into. In fact I am much healthier now than when I used to eat red meat (and the occasional Macdonalds hamburger) every day.

Now I eat meat about once a week. I don't really miss it, but just occasionally I get the urge for bacon sandwiches for breakfast or roast lamb for dinner. The roast lamb in Spain is excellent. Lean and tender, especially when cooked with herbs from the "campo", and some honey baste. Best I've ever tasted.

I got the urge to have a bit of lamb last week. I asked a Spanish friend where I could buy the finest lamb. He directed me to "Jesus" (who better to ask about lambs eh?). He asked which lamb I would like, before he proceeded to dispatch it with much aplomb. My friend brought it home to my house and strung it up from the ceiling. "This doesn’t happen in Leeds" I thought!

We (him actually) then took out all the offal and fried them up with onions and garlic, washed down with loads of cheap costa wine.

Hmmmm these foreigners really know how to live it up. Kiersten, to her credit didn’t throw up all over the place! 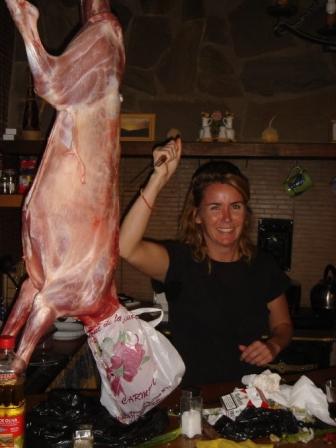 The long road to self sufficiency

Friends David and Aspen Edge at Semilla Besada above Lanjaron, have always argued that, one day, due to the high cost of fuel, tourists will stop coming here, food prices will rocket and there will be petrol shortages. A big argument to get started on the road to self sufficiency?

Well, it seems to have started! This week the Spanish, along with the rest of Europe it seems, have been on strike over high fuel prices. Whilst I sympathise with the strikers, the petrol stations in the Alpujarras and Granada ran dry, panic food buying was seen in the supermarkets etc. In addition the once "cheap" Ryanair flights into Granada seem now, to be not so inexpensive. 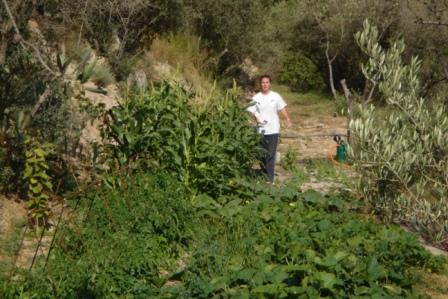 So I had a long hard look at our own food larder on our terraces. Lots of onions and courgettes, but it is a little early for the tomatoes, sweetcorn, squash, pumpkins, peppers, leaks, broccoli and cauliflower. Onions are always useful in the kitchen and we are drying them for storage, but we are getting 2 large courgettes a day from our 9 plants.

Don't know about you but courgettes are pretty tasteless things aren't they? There's only so much you can do with them? Courgette soup or courgette and onion pie every other day is hardly an exciting option is it?

Yes, it is a long hard road to self sufficiency.

Do you remember the old days when a onion sellers from France or Spain cycled through the UK carrying onions and wearing berets? Do they still do that or have Tesco's put them out of business as well?

Anyway, I had a go at stringing onions, of which a wealth of information is found on the internet. All of this was far too complex so I just knotted them together anyway I could. The result? See photo. Not too bad for a beginner. Now where can I get a bike and a beret? 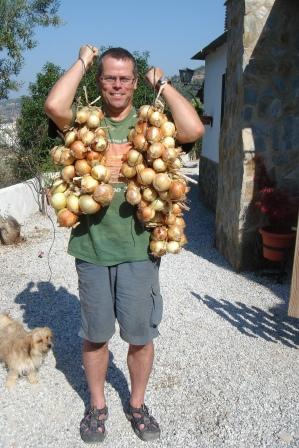 Bit bored today. Too hot to go outside, so I thought I'd have a go at making home made pasta. A bit complicated for a northerner like me, but not that hard actually. 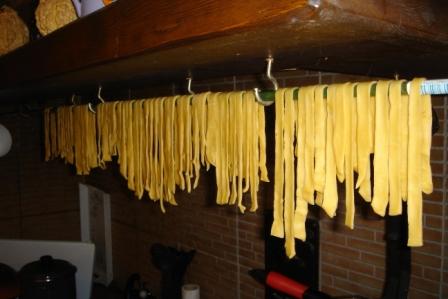 You go through various stages of dough preparation. Just flour, eggs and lots of gentle massaging, sorry kneading. Leave for an hour and roll out into round pancakes. After 15 mins roll and cut into thin strips. Hang out for another 15 mins. Then drop in boiling water for 3 mins.

The sauce consisted of yet more courgette and onions from our land, combined with cream, pesto and tarragon wine vinegar.

The result? Much nicer than the dried bought and packaged variety, especially when washed down with a some of our favourite 85 cent a litre, vino blanco! 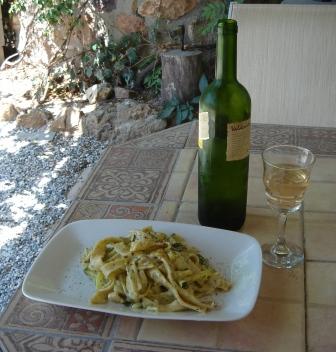 Bugger! You spend the whole spring sorting water out for the vegetables, religiously caring for their every needs. Then the summer comes around and we have 6ft high sweetcorn plants festooned with corn ears. Mmmm, I can see them now, roasting gently on the barbecue! 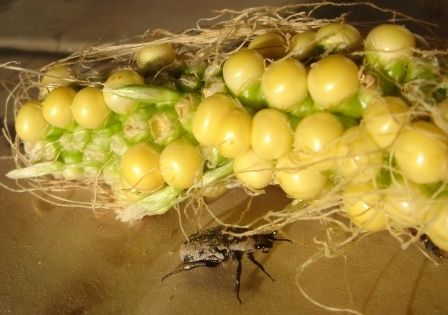 However, along comes this little "thing" (I used much stronger language actually, but am aware I'm "public" on the internet) and gets stuck into his daily eating with vigour. Guess he thinks he just dropped lucky. Not sure what it is? I'm no expert on these things. Could it be a Corn Rootworm Beetle? If so, then we may be in trouble. There are signs of damage to some other plants too.

Looks like the only sweetcorn I'll be having this summer will be out of a can from Carrefour! 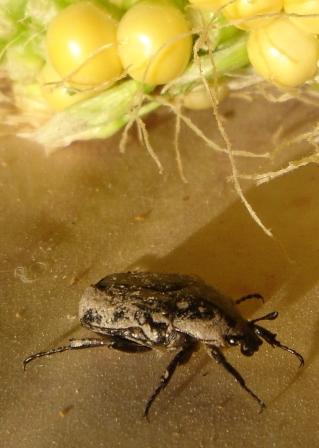 I've just discovered how to make cheese, well, Indian cheese actually. Called Paneer. It shows I've not got too much to do when all Ive got to worry about is either (a) will England manage to bowl out South Africa and win the 1st Test, or (b) will my newly made paneer cheese set properly!

Simple this cheese making lark, actually. Boil some milk, add either lemon juice or yoghurt, and voila ........ 5 minutes later you are mixing the "curds and whey". Drain and cool. Put in fridge. Eat with a tasty curry or better still on a skewer on a barbecue! 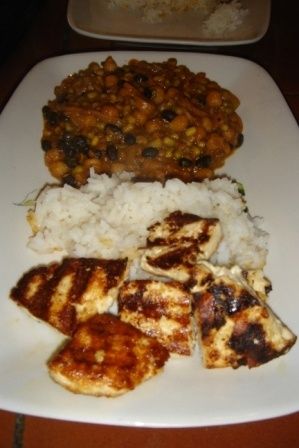 Millet - OK now we’ve grown it, what do we do with it?

We were given some millet seeds some time ago by David and Aspen of Semilla Besada. Not really knowing what we were doing we did the sensible thing, shoved them in a free part of the "campo" and made sure they were regularly watered.

Now in the space of a few months they have grown strong and healthy. We have harvested them today as they are showing some signs of bird attack. The drying process is being finished in the hot sun on our roof terrace.

I must say that I am looking at using the grain in some sort of African or Moroccan stew combination. I'm sure a combination of either the internet or David or Aspen will assist. 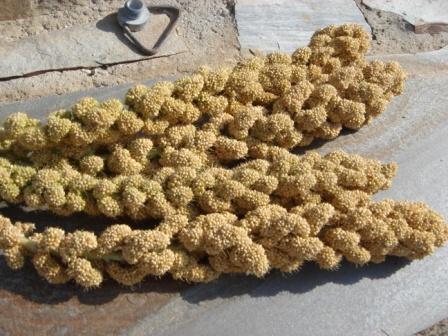 Masterchef, eat your heart out. You ain't seen nothing yet!

During the long hot summer months here in Andalucia, I've been watching the English BBC series, "Masterchef". I am always surprised by the small amount of food these, "Masterchefs" seem to serve. Coming from a middle England, Yorkshire background in the 1960's, we always got served meat and 2 veg. Stodge, whether it was mash, chips or tripe and onions, was always slapped heavily on an already bulging plate of food. Funny how we weren't as obese a race in those days isn't it?

How times change eh? Now they give us a lot less food, albeit looking wonderful, and charge us more money for it? Good marketing, snob value or pulling the wool over our eyes? The trouble is that we are very gullible for this type of "Nouveaux Cuisine" style food these days.

Anyway, today for the first time ever I tried my own "Nouveaux Cuisine" recipe on my partner, Kiersten. She is a vegetarian, by the way. This was the result:

I like proper food. You cannot change overnight. I never could quite restrict myself to putting just 3 carrots, a teaspoon of leeks and half a red pepper on the plate. Life is for living and good wholesome food is part of that life. Don't think I will be entering the Masterchef challenges somehow. Nevertheless, it did put a smile on the face of both Kiersten and myself. Might have to have a big plate of egg and chips for supper!

Investigating My Grandfather’s Part in World War One