The Reluctant Pathbuilder and the Lentegi Circular

It's rather nice when you come across an area of natural beauty that had been overlooked and discarded by yourself, as not being worthy of a visit, despite living in that same region for over 20 years. These are magical finds. We came across such a find last Tuesday in the north-eastern reaches of the Sierra de Almijara.

Beyond visiting the each of the Rio Verde and Pico Lopera walks a couple of times each, my only other hiking  trip here had been to scale the long, drawn out peak of Navachica, many years ago. However, by chance, I came across the local route designated PR440 near the village of Lentegi. We, valiant Nomads, decided to give it a go.

Where we had chosen to start the local route, the PR440 circular loop, conveniently off the main road between Padul and Otivar, had no parking. Doh! This meant a bit of road walking initially before arriving at the "hors d'oeuvre" of the walk, a drop down into a deep gorge. We nearly missed the sharp left hand turn as the sign was off the track. This was a great descent, steep with superb views and surrounded by jagged peaks. Had the map been lying to us? Who put this walk here and then told nobody about it?

The base of the Rio Lentegi valley was reached where we found not a river, not a stream, in fact not a drop of water, apart from a forlorn "fuente" desperately trying to emit some of the wet stuff. We climbed up a steep "barranco" on a series of convenient zig-zags and emerged near a well worn dirt track.

Following the dirt track in a northwesterly direction we, rather surprisingly, came across a small area of local farming communities. A semi circle of peaks rose above us looking like a mini-Dolomites, but trees on their skylines gave substance to the illusion. This whole first section reminded me very much of our third day on the island of La Palma, where we descended through forested hillsides into the Caldera de Taburiente.

Following wide, easy dirt tracks does not suit me. I tend to go too fast, partly because I get a bit bored I guess? This increase in speed quickly tires me out and I have to be constantly reminding myself to slow down and take it steady. Towards the end of this dirt track we headed off on a path on the left. It's had been a well marked trail to be fair to the man who made it, but forgot to say anything to anybody about it!

We took a lunch break and sat beneath the soaring peaks. "Sun or shade?" was the cry as it was difficult to believe we were in fact in January. The sun beat down and the air remained windless. We stripped down to our t-shirts and those that had the foresight to bring along, donned shorts.

Following this well marked trail we came to a loose section where that same path designer had forgotten to put an important signpost. Probably the most important one of the lot. Yes, the only one that we really needed during the whole hike wasn't in fact there! This meant we went slightly wrong and involved us in a short section where Tarzan-like tactics were required. But, us Nomads are made of stern stuff and we quickly adjusted and found ourselves an alternative, more direct route, that led to us to rejoining the correct main track and, remarkably, saving ourselves a kilometer. Fortune favours the brave eh?

Now came the hardest part of the day, a steep ascent back up to the ridge line although admittedly (and kudos to the path designer that forgot the important signposts), it was on mostly well graded zig zags. From there we followed a forest track around the rim of the hills before taking a hiking trail (well signed!) that led steeply down via some narrow sections too, to emerged eventually onto the sunlit hillsides above our start point.

With cold beers calling us and not wanting more uphill walking, we decided on the longer but easier main road route back to the cars. The couple of beers in Otivar went down really well, so well in fact that we had some more in Lanjarón when we reached there.

A superb "Challenging" walk, that left us tired but with some more ideas for future visits to this lovely area. Statistics and photos below. 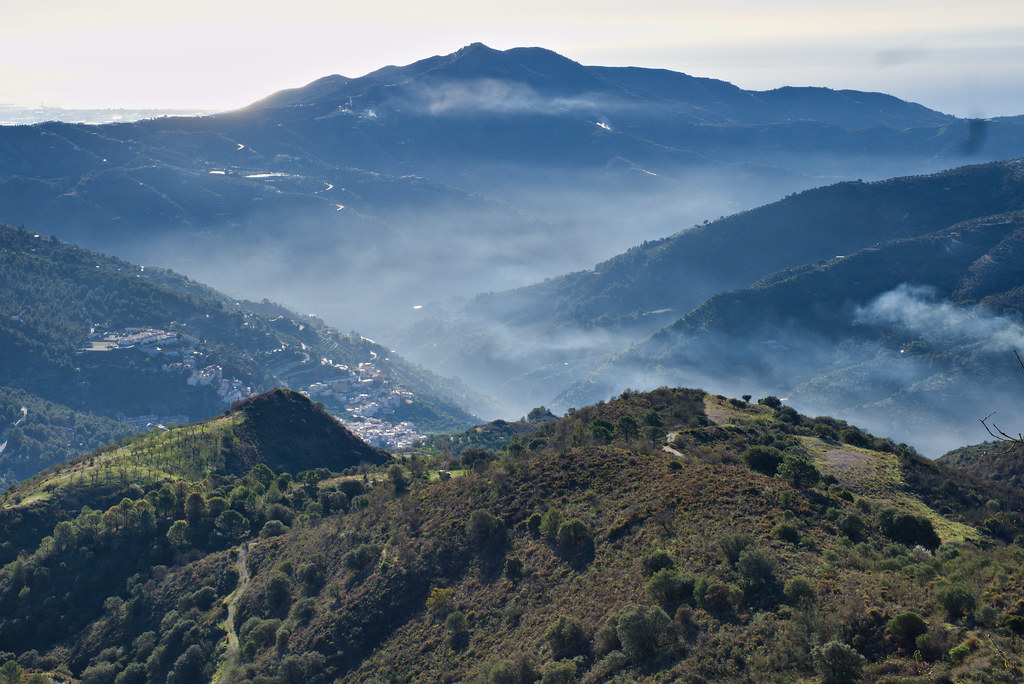 Cold fingers in the Contraviesa