It had been quite a number of years since I had last walked the ridge between Veleta and the Refugio Elorrietta. It's known as the Tajos de la Virgen ridge and is a rough but easy walk with some sections of very mild scrambling involved.

It had been quite a number of years since I had last walked the ridge between Veleta and the Refugio Elorrietta. It's known as the Tajos de la Virgen ridge and is a rough but easy walk with some sections of very mild scrambling involved.

I had forgotten what a magnificent outing this is, made very simple in July and August by using ski lift access to the 3000m level. 45 minutes from the top ski lift and we were at the Collado de Carihuela where the ridge starts.

The ridge viewed from the Veleta area

The initial path alongside the ridge is taken by many but this excludes the summit of Loma Pua, itself a 3000m+ peak with a superb viewpoint. After that you can take a path on the left that omits the initial blocky section of ridge, but to do that is less interesting and indeed, slower than taking the ridge direct. I say direct, but in actual fact it weaves in and out of the ridge crest. There is a faint path and a few cairns to help.

After 30 minutes we arrive at a wide col. Ahead lies the crux of the route, the ascent to the next rocky step on the ridge.

Follow a good track until it abuts against the ridge crest proper. Ignore a few inviting looking cairns leading off to the right here, they lead down and into oblivion! Instead, turn left and head uphill for a further 20m until a well cairned traverse across some somewhat exposed slabs on the northern side of the ridge (N) can be made. Although there is a big drop to the right, those of nervous disposition should only be worried if it is wet, snow covered or icy. Otherwise this is simple.

The traverse across the slabs

The traverse rises up easily to the crest beyond the rock step. The ridge is broad here and leads easily to the feature known as the Fraile de Capileira. This is identifiable from Capileira and Granada as a pinnacle on the ridge and is so named due to it's supposed resemblance to a Monk. Standing beneath the pinnacle, which I guess is about 30m high, it's hard to pick out the Monk.

A bouldery traverse down and round to the left on a well cairned track sometimes over gigantic blocks brings one to a short traverse left and the back right to scramble up a short ramp. The highlight of this is an awkward chockstone at half height which blocks the way and provides an entertaining thrutch to scale. 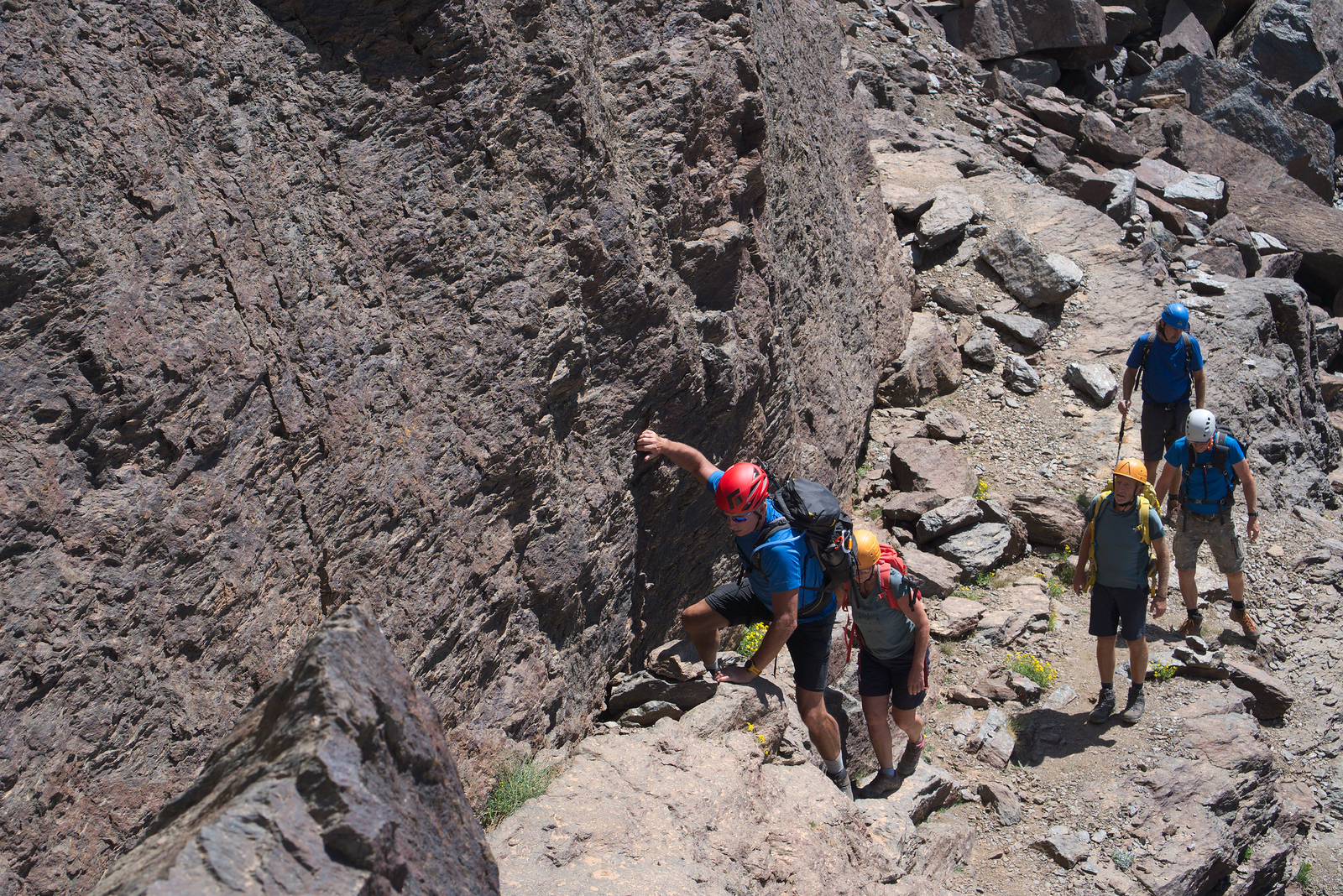 Beyond that there are further large rocky blocks to delicately negotiate until we reach the ridge again. It is easy going now to the Refugio Elorrietta. The traverse back to the cable car station at Borreguilles takes just over an hour.

This is a relatively easy day in summer using the ski lift system for access up and down. A much better alternative to following the hordes of day trippers up Veleta. Recommended!

Ups and Downs of the Veredóns