The ridge didn't let our expectations down. It is a magnificent scramble, probably Grade 3 in places. The highlight for me is the spiky pinnacle of Campario which soars like a needle up intto the sky. It is an impressive and intimidating sight.

The last time I had done this ridge was back in August 2017. I remember I had really struggled to get my breathing right. I was slow, laboured and could only walk a few metres without needing a rest. It felt like I was 8000m on Everest not 3000m high on Veleta! Thinking back, maybe, just maybe, I had had some heart problem then which was making life difficult?

Anyway in July 2022, I was back. A stent, heart medications and the pacemaker fitted in February 2022 certainly seemed to be making a difference as I romped up the steep loose slope to Cerro los Machos without getting too much out of breath. Certainly a massive improvement.

The ridge didn't let our expectations down. It is a magnificent scramble, probably Grade 3 in places. The highlight for me is the spiky pinnacle of Campario which soars like a needle up into the sky. It is an impressive and intimidating sight. The route looks very difficult but once the hands touch rock plenty of holds will be found. We utilised the safety rope in places to give confidence for those needing a touch of reassurance.

After that it is glorious scrambling until just past the Canuto del Veleta, which comes in from the right.

Just 20m along a horizontal path leads you to a steep rock wall with "FF" painted on the rock some 3m above the path. "FF" refers to the original ascendor of this route, a man called Fidel Fierro. 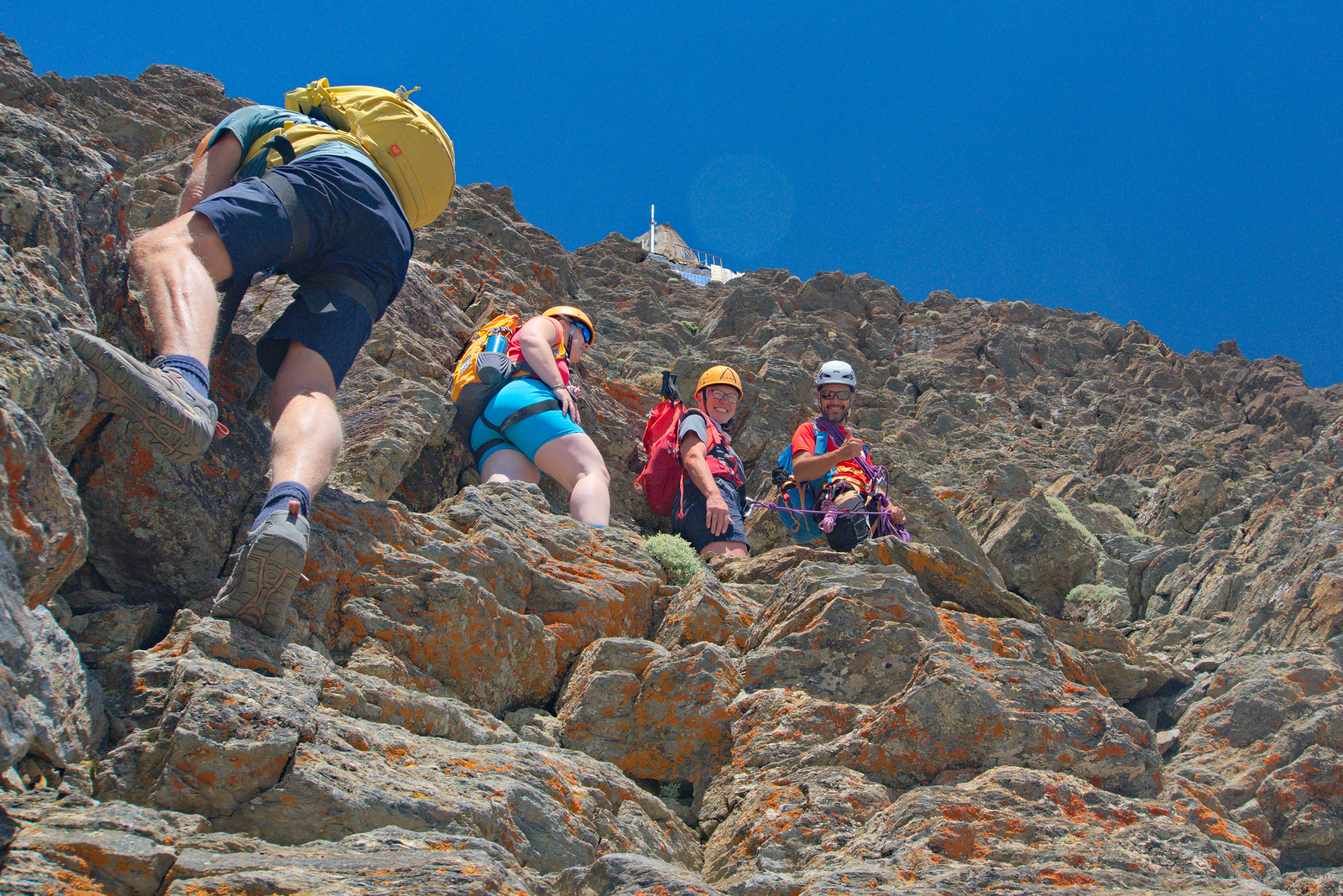 On "Fidel Fierro" with the summit building looming above

Good holds lead steeply up to a loose scree shelf which is followed up and to the right. This leads to the final scrambling section. All on good holds and with protection available from above. Felipe was helping guide the group and he suggested a final rock climb (Grade 4) 10m pitch to finish. Sure enough this landed us below the summit buildings.

The final section to the summit

This photo might not look much but there are about 20 people (mostly young), who have walked up Veleta via the ski lift and were sitting at the top looking away from the vertical drop that we were in fact finishing our scramble up. All of a sudden our group, consisting of mainly pensioners, appears from this vertical void, says hello and sits down to calmly eat their sandwiches. We did get some funny looks🤣 Priceless